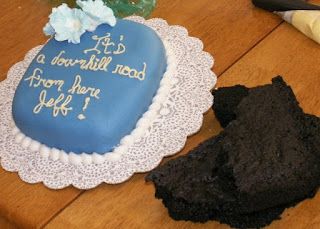 There is a story that goes along with this cake.
With the house on the market I tried to bake something every time we showed the house so that it smelled good all day. We got short notice to show the house so I threw a cake in the oven, cleaned like a whirling dirvish, got the kids packed up, the dogs in the car, and got out of the house for the first of 3 showings that day. We spent the day at grandma's house accross town.
At around 3pm, with the kids napping at grandma's, Randy and grandma out shopping, the thought snapped back into my head that the cake was still in the oven....almost 8 hours later!! So the house smelled like burned cinnamon spice cake, it was a little smokey but none of the realtors said anything about it... What you get left with is a perfectly black cake, all the way through.
This happy occasion coincided with our neighbor's 50th birthday so Randy dared me to decorate the burned cake and give it to him. With his wife in on it, I decorated it up, and gave it to him...with a straight face... :D
His wife held a straight face and handed him a knife to cut the cake, and then a serraded knife when the other one wouldn't work....he actually sawed the cake in half with a little effort and a confused look on his face before she burst out laughing and let him in on the joke.
Don't worry, we invited him over for a slightly better cake the next day :D